The iPhone and its 3G-toting successor aren’t the only all-touchscreen offerings for smartphone fans. There’s no rule saying that anyone wanting an attractive touchscreen smartphone have to buy it from Apple (but capacitance multi-touch sure does make the decision hard to avoid).

RIM, makers of the BlackBerry smartphone lineup, has their own iPhone-fighting handset bearing a full-body touchscreen in the works. The RIM BlackBerry Thunder, as it’s called, has finally been spotted in the flesh (or plastic). The BlackBerry Thunder is poised to steal some of the 3G iPhone‘s, uh, thunder with it’s sleek lines and presumably sleeker BlackBerry OS UI. 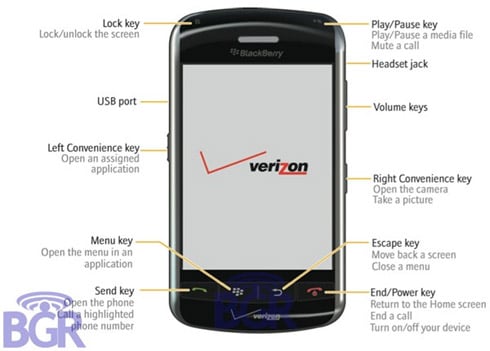 What you see here is a Verizon-branded variant of the BlackBerry Thunder. This isn’t some blurry, questionable picture of the upcoming BlackBerry Thunder, this here is the real-deal, in-the-wild image of the Thunder in all it’s glory. There’s a boat-load of buttons adorning the edges of the Thunder, so we can safely say that Apple’s minimalist philosophy did not carry over to the device that was once only known as the BlackBerry AK. Still, with RIM’s new BlackBerry OS making big waves on the BlackBerry Bold, we’re looking forward to the touch-based version to be just as, if not more, impressive.

We’ll wait to see just how thin RIM’s first touchscreen offerings turns out to be before we pass judgment.

Pricing and availability? You wish…

Props to BGR for scoring these live pics!

And they just keep rolling in like unstoppable forces of nature. The iPhone 3G (or 3G iPhone / iPhone 2,...