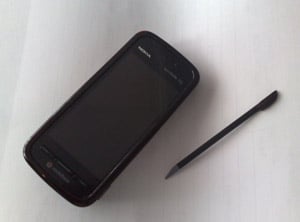 There’s nothing like a little in-the-flesh product leaks to start of the day. I don’t know how leaks like this happen, but I’m glad someone had foresight to save these images of Nokia’s N79, N85, and 5800 XpressMedia Tube before the originating Flickr account got deleted.

The Nokia N79 hasn’t been confirmed for production and still bears the “N00” label, indicating that the final details on this handset are still being hashed out in Espoo. The candybar/monoblock form-factor is reminiscent of the Nokia N82, and the menu key has been m 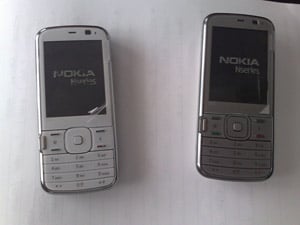 oved to the left of the navigation pad. It looks like the Nokia N79 sports a 2.4-inch display, and we could see the N79 launch in a choice of Titanium or White color schemes.

The Nokia N85 has recently surfaced on the interwebs and we’re thinking that device’s familiar, Nokia N95/N96-esque aesthetic could prove to be a real winner for Nokia’s N-series lineup. The camera is protected by a lens cover in favor of a “kick-stand,” like we see on the Nokia N96, and looks to be sporting a dual-LED flash setup. We can clearly see that this supposed Nokia N85 is still in development, bearing the “N00”

model name. Whether we’ll see this handset launch as the Nokia N85 or some other moniker remains to be seen. But, Nokia would do well to get a Nokia N96 “Lite” to market.

Now, I really like the Nokia Tube and the N85, but I have to wonder whether Nokia can really market such a large portfolio of N-series devices. I always thought that Nokia’s N-series was reserved for devices that are packed full of the latest features in the mobile space. The Nokia N85 and N79 look like lower-end, or “lite,” versions of higher-end N-series counterparts. Would any of you consider picking up a Nokia N96 “Lite” in the Nokia N85 when you know that the Nokia N96 is sitting just a bit further up-range in the N-series lineup?

With Steve Jobs looking for a simultaneous global release of the iPhone 3G in 22 countries, it makes sense that...