Back in February, we wrote about the 3G streaming services provider – Vollee and their plans to bring Second Life to mobile screens. Just recently, they’ve released the first beta application to allow Second Life residents with 3G and/or WiFi enabled phones to “explore the entire virtual world from their handsets.” 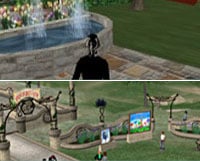 Users download a thin-client to their device and log-in using the existing Second Life accounts. On the other hand, Vollee’s technology intelligently adapts the Second Life Grid (an inter-connected platform which extends beyond the mainland of Second Life) for use on 40 mobile handsets at launch. Support is planned soon for additional 3G and Wi-Fi enabled devices, including the iPhone.

Commenting on the release, Vollee’s CEO Martin Dunsby said they are very proud to debut their service with Second Life, further emphasizing they can do much more. “This application is just one example of how Vollee is capable of bringing persistent worlds, MMOs and graphically intensive PC applications to mobile in a way that works,” he added.

To download the free Second Life mobile application and view a complete list of supported handsets, hop over to www.vollee.com/secondlife.

According to In-Stat, mobile social networks are quite popular with the millennial generation, just as social networking is. Blogging, photo...