How’s that for some serious iPhone support from the development community? A survey from WWDC indicates that most, around 70%, of iPhone developers are planning to give away their hard work for free through Apple’s AppStore. 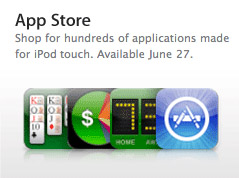 Piper Jaffray analyst Gene Munster found that “the average cost of iPhone apps on the App Store to be $2.29, with 71% being free.” And, it looks like about half of iPhone developers will be giving “enterprise apps” a go – with roughly equal development efforts going towards location-based services, entertainment-oriented applications, video games, and other enterprise applications.

So, with the majority of these delectable applications expected to be offered for free (at least in first-run versions), it makes sense that Apple has started to encourage developers to charge for their wares. Apple stands to take a 30% revenue cut from AppStore applications, and they want to make sure they can get away with as much cash as possible.

The AppStore is possibly slated to go live on June 27, but that date could very well change soon. Until then, we’ll just have to wait for all those iPhone applications to go live.

Welcome to the club, BlackBerry owners! Following on RIM's announcement of their Media Sync service, Flickr has released their free...