But, more interesting are the newly discovered iPhone application size and price limits on the AppStore. Apple has apparently limited all iPhone apps to 2GB in size. While the AppStore gives the iPhone developer incredibly wide-ranging control over their application’s age-rating, distribution region, pricing, and even marketing aspects, Apple has capped applications to just 2GB and will be limiting prices to $20 per app. 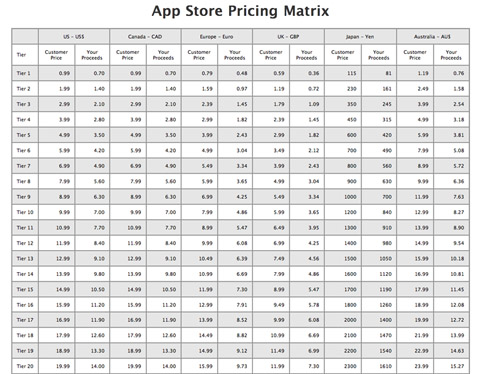 Apple’s goal of selling most iPhone applications for $10-or-less has thus far panned out – with already-announced iPhone applications set to cost about $10 on launch. But, iPhone developers can choose from 20 different pricing tiers, ranging from about $1 to about $20 on the high-end. The higher-priced tiers also suggest that enterprise, “pro-level” applications could be offered at higher price points than non-enterprise software. Of course, developers can choose to give their software away for free, which is always the most attractive price.

In the end, we’ll see a huge array of iPhone applications launching on July 11. A good number of applications will be free, but we’re also expecting a handful of apps to go for $10 or less. Here’s to hoping that the 2GB application limit doesn’t hurt data-heavy applications, like navigational software, too drastically.

Well, look what the iPhone SDK-birdy just dropped on our laps? No, not that kind of dropping. It seems that...