The best kinds of rumors come straight from the hardware source. The latest Adobe Flash rumor to hit the iPhone-scene is actually based on images shown on Apple’s own iPhone 3G webpage. It seems that a depiction of the website Lonely Planet on an iPhone 3G shows Flash-enabled content flawlessly rendered on the screen.

There’s a key Flash-component on the Lonely Planet website that’s hard to overlook – the interactive, two-toned world-map. The full-fledged version of the map makes use of Flash and offers cursor-activated animations. When viewed on a non-Flash capable browser, however, the map reverts to a non-Flash, single-color version.

Visiting the website’s homepage on your iPhone’s Safari browser running v1.1.4 firmware (as well as previous firmware versions) results in the following page-render: 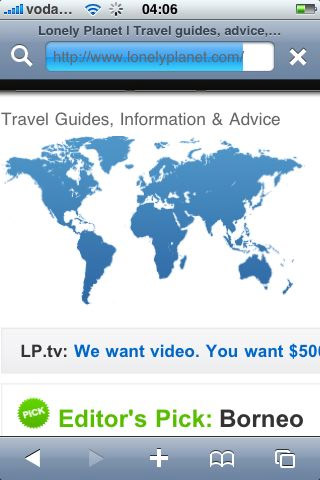 Visiting the site with the Flash-capable Mac OS X 10.5.4 Safari browser results in a world-map page-render that looks like this:

Notice the two-tone map in the second picture. The dual-colored map also allowing for interactive animations triggered by cursor hovering. The first map uses just a single shade of blue, indicating the Flash is not in play. The second map shows that Flash is definitely enabled (which makes sense).

Now, check out this image from Apple’s iPhone 3G page: 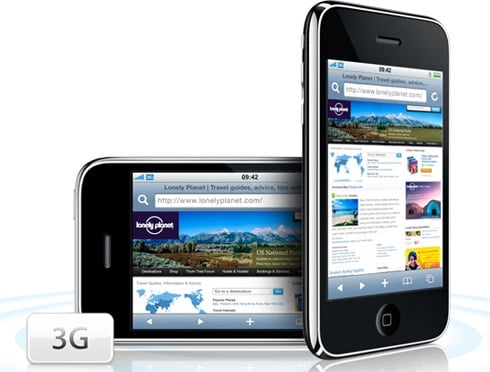 Notice the fully-rendered homepage with the Flash-enabled world-map in plain view.

What gives? Did the iPhone 3G artist simply slip-up or get lazy? Is this a case of the graphics artist simply resizing the full Lonely Planet homepage and depicting it on the iPhone 3G screen? Or is Apple seriously working with Adobe, on the down-low, to bring full Flash functionality to the iPhone’s next firmware revision?

We have no idea, but it sure is nice to think that iPhone 2.0 OS will bring with it Flash capability. Thoughts?