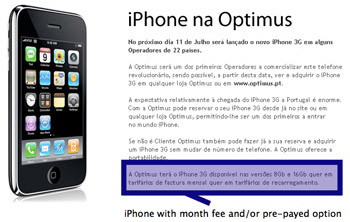 Always highly informed Boy Genius and its sources inform us that Portugal-based Optimus will be offering the iPhone 3G both as a post and pre-paid phone. Apple’s revenue-sharing deals are certainly out and now this is made possible. However, I must warn you not to expect the low, low prices of the pre-paid iPhone. Rather I would think it will fall in line with the unlocked prices we reported earlier — 499 EUR for the 8 gig and 569 EUR for 16 gig version.

The way I see it, it’s a matter of choice. Many people I know don’t like an idea of binding themselves with way-too-long contract terms, and I guess Optimus wants to reach that those of folks as well.

With the next Batman movie scheduled to hit theaters within a month (July 18), Verizon and Nokia are releasing the...