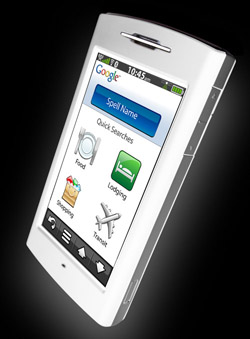 With the Apple iPhone 3G slated to be released in a 16GB White variant, we’re hearing that Garmin could be considering a White variant for their navigation-oriented Nuvifone.

Garmin is still expected to start shipping the Garmin Nuvifone in Black for $500 in Q3 2008, but if this latest rumor pans out, we could see the touchscreen handset released in both White and Black. Of course, with the iPhone 3G announced at a considerably lower price-point and with integrated GPS to boot,

The rumor is based on the questionable images you see here, depicting a White Nuvifone, that was sent to NaviGadget, so we’ll stop short of commenting on this rumor’s validity until we get further confirmation.

T-Mobile today announced an update for Sidekick LX owners. A host of upgrades is promised to the existing LX users...