Garmin, one of the biggest names in GPS navigation hardware, has announced that it has, for the first time ever, outsourced production of a device. The Garmin Nuvifone, long-expected to marry Garmin’s GPS navigation prowess with the convenience of a mobile phone, will apparently be manufactured by ASUS. 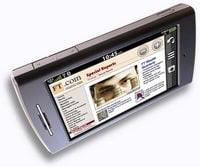 project for over two years now. Although Garmin values “its own vertical integration, and had never outsourced its products,” the prospect of merging GPS navigation technology with the complicated RF technologies incorporated in to mobile phone was too big a task for Garmin to go at it alone. As such, Garmin tasked ASUS with providing RF development know-how and manufacturing the Nuvifone.

Garmin’s director of OEM and mobile marketing, Roger Jollis, confirmed that the first Nuvifone will be the first in line of Nuvifone-branded devices planned for the next few years.

We’re expecting the Garmin Nuvifone to go live later this year (possibly with a White version alongside the confirmed Black Nuvifone).

If there's one thing a group of college students are probably most aware of in the mobile space, it's the...