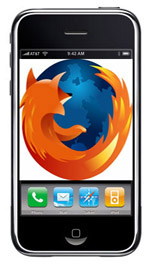 If there’s one thing the iPhone isn’t lacking anymore is considerable third-party developer support. With the Apple AppStore slated to launch a few weeks, we are seeing iPhone applications of all sorts getting ready to make life easier/funner/more informed for iPhone users. But, until now nobody seems to have given much thought to a third-party web-browser for the iPhone.

Third-party web-browsers would not only give iPhone users more choice in how they want to play with their web-access, but it could even open up the possibility of seeing third-party plug-ins that could allow Flash to finally work on the iPhone.

iPhone Atlas has an interesting take on this. The problem with third-party web-browsers is that Apple’s own iPhone SDK agreement seems to essentially block development in this arena:

“No interpreted code may be downloaded and used in an Application except for code that is interpreted and run by Apple’s Published APIs and built-in interpreter(s) […] An Application may not itself install or launch other executable code by any means, including without limitation through the use of a plug-in architecture, calling other frameworks, other APIs or otherwise.”

Now, the question is just how the above verbiage can be interpreted. If it turns out that Apple won’t allow for third-party applications to rock plug-ins or for any non-Webkit HTML/Javascript renderers, then web-browsers like Mozilla’s Gecko-based Firefox could be dead in the water.

On the other hand, if Mozilla can find a way to make their mobile web browser work on the iPhone, we’re all going to be going on an interesting ride.That is, if Apple allows for competition to their iPhone Safari browser to hit the AppStore.

Helio shutting down retail stores and kiosks – another MVNO’s death in the making?

With SK Telecom's Helio MVNO talking to Virgin Mobile over possible merger or buy-out deals, it seems an odd move...