While the floundering handset once-juggernaut tries to fool itself and the public that a commendation for “teamwork” is as important as actually pumping out handsets that are worth anyone’s time, it seems Motorola has proved, once again, that “the bigger they are, the harder they fall.”

Oh yes, Motorola was once huge. They were a global handset manufacturer to be reckoned with. The Motorola RAZR turned the industry on its head and every manufacturer worth their salt scurried to produce a slim handset that could compete with the RAZR. But, after years of milking the same RAZR-cow, Motorola has ended up with nothing more than memories and regrets. 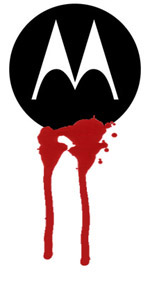 The latest handset manufacturer to hit the scene and stir up the pot is Apple. The Apple iPhone has shocked the handset industry in to yet another scramble for sleek touchscreens with clean lines and intuitive UIs. Alas, the same folks that were drawn to the Motorola RAZR’s gotta-have factor and sleek design have reportedly jumped ship to the new hotness from Apple.

A recent JD Power survey found that a full 24% of Motorola RAZR users (20,000 users polled) decided to ditch their aging and barely functional clamshell to the huge multi-touch display on the Apple iPhone. Now, with 5.4 million iPhones sold to date, that the survey points to 1.3 million former RAZR customers fully embracing the iPhone.

Sure, the original iPhone has its flaws, but RAZR-lovers have apparently seen past the lack of features and are now enjoying their iPhone. Which begs the question, how many more RAZR-defectors will the iPhone 3G attract?

In the end, this should be yet another message to Motorola. Get your act together and concentrate on the high-end. Give consumers something to really get excited about. A 5 megapixel Kodak camera is great, but when you leave out 3G data connectivity, and keep it locked in to Asia, you’re not going to recoup those R&D costs. Of course, Apple left 3G out of the original iPhone, so you might be thinking it was acceptable on the ZN5 – but then you’d be wrong. The iPhone has so much more going for it that EDGE is acceptable. The Motorola ZN5? Not as much.

Concentrate on keeping customers for the short-term. Customer defections are going to drive you in to the ground. Prioritize handset development for the long-term – and ditch all your preconceived notions of success, the RAZR model no longer applies.

There’s nothing I want to do more than write about Motorola’s fantastic turn-around and successes. Please let me do that.

We haven't seen too many concepts of late, but that doesn't mean we don't like to see what the creative...