The iPhone 3G will be offered with iPhone specific rate plans and will be offered at €149 and €199, for the 8GB and 16GB versions of the iPhone 3G, respectively. iPhone 3G hopefuls in France will have to choose from one of Orange’s “Orange for iPhone,” Origami Star, First or Jet plans. 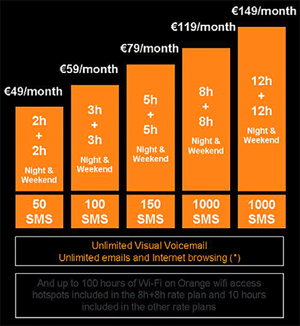 And, much like O2 UK is doing with for their current iPhone customers, Orange is giving any customers with first-generation iPhones a break on their iPhone 3G purchase. Orange will offer a €100 rebate to any customers looking to upgrade their iPhone to the next-generation iPhone 3G. The rebate will effectively lower the price of an 8GB iPhone 3G from €199 to just €99, but will require a new 24 month commitment from the customer.

Any Orange customer looking to make the jump from their current non-iPhone handset to the iPhone 3G can look forward to paying €199 and €249 for the 8GB and 16GB iPhone 3G, respectively. Customers choosing a calling plan other than those intended for the iPhone will also be looking at €199 and €249 prices for the iPhone.

It seems that Alltel is picking up their game in the face of acquisition from Verizon Wireless. Following on their...