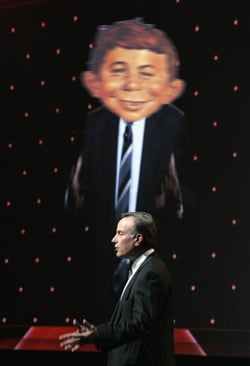 In a recent interview, Verizon’s CEO proclaimed that not only will Verizon Wireless succeed in capturing a significant portion of US customers looking to get in on the mobile internet boom, but that wireless carriers will have the power to control emerging wireless service business models.Rather than coming to terms with his company’s, as well as wireless carriers around the world, demise in to dumb-pipe-dom, Ivan Seidenberg insists that wireless operators can maintain their strangle-hold on the wireless landscape -by forcing customers to choose in-house services over third-party service like push email, streaming video, etc.Seemingly bitter that Seidenberg essentially blew his chance to take full control of Verizon Wireless by buying out Vodafone’s 45% stake and then passing up the chance to be the exclusive US iPhone carrier, the Verizon Communications CEO goes on to deride Apple and Steve Jobs as nothing more than passing fads that will eventually “grow old.” While the iPhone hype may die down, as Ivan would like to see, there’s no getting around the fact that mobile operators will eventually be reduced to nothing more than network connections through which savvy consumers will be passing data in their quest for superior third-party services.Here’s the thing. It’s one thing to declare your company in great shape and having achieve fantastic success in recent years – both of which are true of Verizon Wireless’s growing business. But, it’s a completely different thing to proclaim that you have complete control over the direction that the wireless industry is headed. If I were a Verizon investor, I’d be wary of the company’s leadership looking to maintain unrealistic control over a continually changing wireless landscape. Ivan Seidenberg’s stubbornness against change may be more of a liability than an asset.[Via: FT]Image from DigitalDaily

This sounds all too familiar. Like Helio's inability to turn a profit despite increasing their cash inflow, Palm has posted...