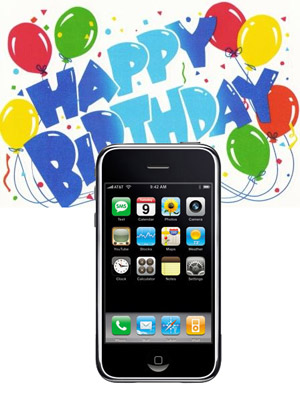 As of 6pm PST today, my iPhone will be turning exactly 1 year old. Well, actually, seeing as how it took me a good 20 minutes to get inside the Apple store last year, my iPhone’s 12-month birthday will fall on approximately 6:20pm PST.

Usability and user experience
The one aspect of the iPhone’s appeal that is undisputed is its incredible UI and un-matched user experience. From the way the iPhone flicks through menus to the way I can interact with different applications and webpages, courtesy of multi-touch, the iPhone lacks a competent competitor.

Anyone even vaguely familiar with the mobile space will already know that the iPhone has redefined the way smartphone users should expect to interact with their handsets. Which inevitably means that we’ll be seeing more and more touchscreen offerings from other manufacturers. How long it will take them to refine their respective UIs to Mac OS standards has yet to be seen.

Features
Furthermore, the iPhone’s weakness lies in its feature-set. With a disappointingly lacking Bluetooth stack that doesn’t serve up tunes over A2DP Bluetooth, recessed headphone jack, inability to record video out-of-the-box (but, there are third-party video recording options out there), and lack of MMS, the iPhone failed to deliver as a truly complete mobile phone. Oh, and there’s the sealed battery compartment – but a simple portable battery charger makes a secondary battery pointless (and every mobile enthusiast should have a portable battery charger, if you don’t, get one post haste).

Honestly, the only time I’ve missed not having MMS on the iPhone is when I tried to email a photo (a highly integrated and seamless process, by the way) to one of my friends that has yet to embrace the smartphone revolution. I was able to email it to his mobile phone email, so the photo was still delivered.

But, what I realized was that mobile email will eventually kill off MMS. If not already circling the drain, MMS and it’s pay-per-use model will succumb to email as the delivery method of choice for sending pictures to other mobile phones. If you don’t have a mobile email-capable handset, consider it for your next mobile phone – it’s worth it.

I haven’t missed video recording that much (aside from the random Bugatti Veyron or Cizeta-Moroder V16T that I wish I had recorded rolling through my neighborhood). And since I don’t go around recording video, the third-party video recording solution has proven more than adequate for my needs. Video recording power users will want to go another route – or just keep a video-recording power-phone in your other pocket.

The 2 megapixel camera is decent and gets the job done, but it’s not going to match up to the German optics and high-megapixel sensors in certain other handsets – if image quality is important, again, look elsewhere. And, the headphone jack and Bluetooth disappointments are so far barely acceptable, but I’ve learned to deal with it.

How do I deal with having inferior hardware features? It’s the Mac OS combined with a huge multi-touch display, people!

Durability
Apple is known for products with outstanding build- and materials-quality, so my iPhone’s robustness hasn’t surprised me one bit. I’ve dropped my iPhone countless times and haven’t noticed more than a bit of scuffing and slight denting on impacted corners. The screen is still immaculate.

Reliability
My iPhone has been rock solid in build and reliability since day one. I’ve had friends and family get hit with iPhone dead-screen issues, wobbly headphone jacks, bricked iPhones from botched jailbreak procedures (which is their fault, really). But, all those problems were promptly handled by an Apple store employee – by putting a new iPhone replacement in to their hands.

Aside from hardware problems, my iPhone hasn’t needed to be reset (or rebooted) much. I only reboot it occasionally to ensure speedy operation and zippy multi-tasking. If not for my obsessive need for top-notch performance, I figure I’d only need to reset the iPhone during a firmware update (which is likely what most people do).

Overall
So, has the iPhone met my needs as a wholly contained mobile platform? Almost. I keep a plethora of mobile phones strewn around my “personal space” (read: living room) for this reason. I keep Windows Mobile Standard and Professional handsets (more than I care to list here) around for when I want to try out the latest Windows Mobile offerings. For my Symbian and photo-taking needs, I have my Nokia N80 and Nokia E61. My Palm OS needs are handled by a Palm Centro. I used to rationalize my fashion phones’ existence by telling myself that I’ll use them when I go out to clubs or bars, but the iPhone is far more eye-catching than a Motorola KRZR will ever be.

So, the phone I use almost exclusively is the iPhone. The iPhone’s UI has spoiled me to no end. With multi-touch and Mac OS, the iPhone has redefined what I expect out of a mobile phone. Performance and features used to be what I demanded from a handset, but the iPhone has shifted my perspective. With all high-end handsets soon to offer feature-sets that are on par with the competition, the UI is what will differentiate one handset from another – which I talk about here. That being said, I can’t comfortably use any other handset for prolonged periods without longing for my iPhone – which is why I always keep it in my other pocket.

By now it should be clear that iPhone 3G hopefuls in Canada are getting the short end of the data-plan-stick....