By now it should be clear that iPhone 3G hopefuls in Canada are getting the short end of the data-plan-stick. Rogers (and their wholly-owned Fido network) announced not too long ago that they’ll be offering our friends to the North a chance to get their hands on an Apple’s next-generation iPhone, the iPhone 3G, come July 11. The catch – you’ll get reamed on Rogers’ and Fido’s data-plan pricing. 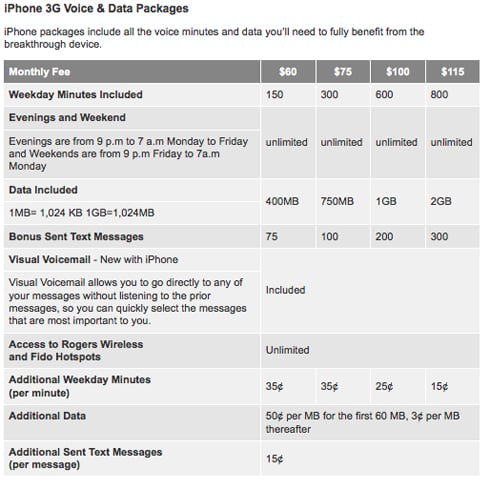 Rogers defended their iPhone 3G pricing position by saying that the calling plans were tailored to fit different needs, striving to ensure that customers didn’t end up paying more for services they didn’t need or want. The carrier argued that an unlimited data offering would increase iPhone 3G calling plan prices needlessly, ultimately shorting the customer.

So, what options are left to disgruntled Canadians looking to get their hands on an iPhone 3G next month? Start a petition, of course. Rather then sit back and take what Rogers gives them, a group of enraged iPhone 3G hopefuls have formed RuinediPhone.com in hopes of gathering enough petition signatures to sway Rogers’ hand in iPhone 3G rate plan pricing.

So far, the website is boasting over 12,500 signatures and looks to be growing steadily. If you’re looking to pick up a next-generation iPhone 3G come July 11, but can’t stand the taste of Rogers’ greed, sign the petition and pass it on to your friends. The petition will be sent to Rogers on July 11, in hopes that the prospect of losing tens of thousands (if not more) iPhone 3G customers (which could ultimately lead to reduced iPhone 3G revenue) can help persuade Rogers to offer a more sizable data plan for the iPhone 3G.

Find the petition here. You don’t have to be a Canadian to show your disapproval of Rogers’ business practices. Give our Canadian friends some help and sign the petition, regardless of your address.

This one goes out to all you cyclists out there. Wouldn't it be nice if you could harness all that...