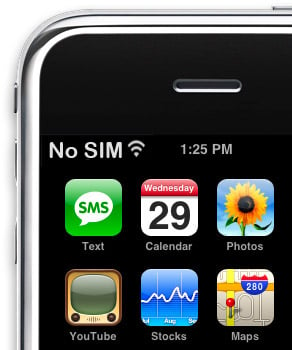 By now it’s clear that most first-generation iPhone owners are planning to hock their jailbreak-able and unlock-able Apple smartphones in preparation for next-generation iPhone 3G’s arrival. But, there are likely to be more than a few of you out there that just can’t bear to part with your precious handset. For you sentimental types, Apple and AT&T have confirmed that you can hold on to your de-activated iPhone and use it as a WiFi Internet Tablet and iPod.

“If the [original] device is not re-activated as a wireless phone after you’ve upgraded to iPhone 3G, it will still work as an iTunes player and can access Wi-Fi,” an AT&T spokesman told Apple Insider.

So, your deactivated iPhone won’t be able to surf the web via AT&T’s network or make voice calls, but thanks to the magic of WiFi, you can still browse your favorite tech blog (ahem) and even hit up the iTunes Music Store. And, if you so choose, upgrading the iPhone to the iPhone 2.0 OS will open the doors to Apple’s AppStore and access to more enterprise features.

As for our own iPhones, they’ll be finding new homes in the next few days.

The iPhone's conspicuous lack of a physical keyboard is at once a draw for those in-the-know and a deal-breaker for...