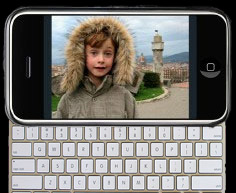 Despite much improved enterprise support in the iPhone 2.0 OS firmware that will be available as a free update for iPhone users and pre-installed on all iPhone 3G hardware, Apple is rumored to be testing prototypes for an iPhone with a physical, slide-out keyboard. The prototypes are said to have been seeded to unnamed wireless carrier executives for in-the-field feedback.

Steve Jobs previously criticized the need for physical keyboard on touchscreen handsets, but that doesn’t necessarily mean he and Apple won’t be going after another profitable niche with a keyboard-toting iPhone.

Physical-QWERTY lovers out there might do well to keep their hopes from flying too high for now, however, since Apple is known for throwing us for a loop with leaked misinformation.

If true, we could see yet another iPhone variant hit the market – iPhone Pro, anyone? Or, at the very least, support for Bluetooth keyboards…

Motorola has unveiled their latest addition to the MOTOZINE flagship lineup. The Motorola MOTOZINE ZN200 previously popped up in device...