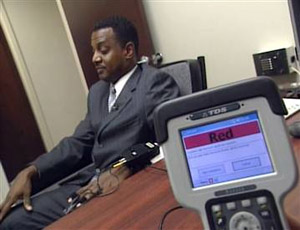 It’s hard enough to tell when someone is lying to your face in a language you grew up with, but it’s all that much harder when the suspect in question is lying in a foreign language. And, when you’re talking about lies that could get US troops killed in Afghan and Iraqi battlefields, those lies become a growing liability.

So, in an effort to help US Army soldiers identify fibbing suspects in the field, the Pentagon will be issuing Windows Mobile devices to grunts in Afghanistan – with possible deployment in Iraq. The new lie-detection technology isn’t perfect, according to the Defense Department, but it’s helpful in sorting out which local police officers, interpreters, and allied forces are legit and which should be kept from getting too cozy with US military personnel and information.

With Windows Mobile recently earning Federal security certifications in both Windows Mobile 5.0 and Windows Mobile 6.0 trim, the mobile platform perfectly suited to carry-out the military’s polygraph-needs. Of course, the WinMo devices in soldier’s hands have probably been tweaked to the point where system crashes are non-existent.

“We’re not promising perfection — we’ve been very careful in that,” said Donald Krapohl, special assistant to the director at the Defense Academy for Credibility Assessment. “What we are promising is that, if it’s properly used, it will improve over what they are currently doing.”

But, there are those that oppose the deployment of this lie-detection technology in hotspots like Afghanistan and Iraq. “I don’t understand how anybody could think that this is ready for deployment,” said statistics professor Stephen E. Fienberg, head author of a 2003 National Academy of Sciences study undermining lie-detection technologies. “Sending these instruments into the field in Iraq and Afghanistan without serious scientific assessment, and for use by untrained personnel, is a mockery of what we advocated in our report.”

In either case, we gotta give it up to Windows Mobile for being the battle-hardened mobile OS of choice for the US military. Them’s some serious bragging rights.

For the average person, the prospect of controlling your mobile phone's music player and camera with a flick of the...