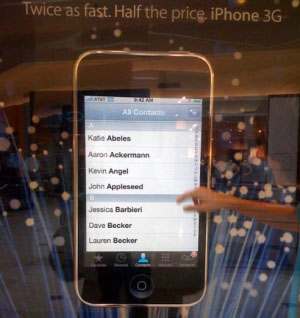 With the iPhone 3G launch so close we can almost taste it, Apple’s retail stores are putting on their Sunday best and bringing out the iPhone 3G advertising-guns. Similar to what we saw last year, Apple stores are erecting larger-than-life iPhone 3G displays to give customers a chance to explore the iPhone 3G’s feature-set. And, a leaked memo indicates that Apple stores will be taking shipments of iPhone 3G demo units starting July 8.

Employees are apparently instructed to download apps from the AppStore on July 11, and should activate their iPhone 3G demonstration models on July 10 – which means eager-beavers won’t likely be getting a preview of a real, live iPhone 3G or the AppStore until launch-day.

Still, if you hound an Apple store employee long enough, they might just let you touch it…

In a not so unsurprising turn of events, O2 has had to halt its iPhone 3G pre-order system in the...