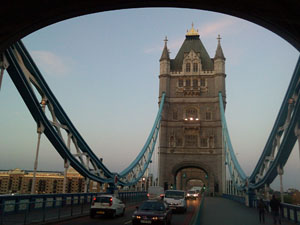 Motorola’s latest flagship cameraphone has been making the rounds of late. The folks over at Crave managed to get their hands on the 5 megapixel Kodak-branded cameraphone that is the Motorola MOTOZINE ZN5, and they’ve posted the sample photo you see to the left. (full-resolution version here)
One of the ZN5′ highlights (aside from that high-quality camera, of course) is that it doesn’t bear any resemblance to the tired RAZR styling that Motorola has been pushing on us for years. A quick flick of the camera lens cover affects a lickity-split camera start-up time, and shutter lag (an annoying problem with many high-end cameraphones) was almost non-existent.

The Xenon flash helps light up dark-shots, but the one thing that seems at odds with the Kodak-branding is that neither the optics nor the image sensor were touched by Kodak. The imaging giant apparently played a limited role in developing the camera interface.

All in all, the Motorola ZN5 proved to be a competent cameraphone, but the lack of 3G may be a deal-killer for many high-end handset enthusiasts out there – perhaps that explains Motorola’s decision to debut this handset in China.

The Canadian GSM carrier has been getting some serious flack from consumers and business partners alike over their controversial iPhone...