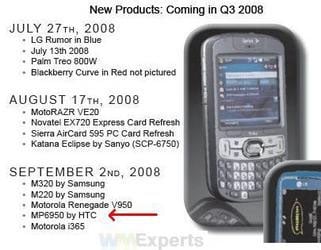 Following on the CDMA HTC Touch Dual’s appearance on the FCC’s website, as the HTC NEON400, we’re hearing that Sprint is lined up to offer the HTC Touch Dual on September 2nd.

A leaked Sprint document shows that the No. 3 US wireless carrier is going to offer an “HTC 6950” during the first week of September. Given that the HTC Touch was originally listed as the HTC 6900 of Sprint’s inventory list, this new HTC 6950 could very well be the HTC Touch Dual in CDMA guise. Of course, take all this at face value – especially considering that the July 27th launch date listed on this leaked document for the Palm Treo 800w has been revised for July 13th.

But, even if the HTC 6950 doesn’t turn out to be the HTC Touch Dual, Sprint’s got a busy summer schedule ahead of them. We’re seeing a Blue variant of the LG Rumor, the Palm Treo 800w, the Motorola RAZR/Vegas VE20, various data card refreshes, Sanyo’s Katana Eclipse, Samsung’s M220 and M320, Motorola Renegade V950, and Motorola i365 all slated for release in the coming months.
Granted, most of Sprint’s upcoming lineup, save for the Palm Treo 800w and HTC 6950, aren’t exactly high-end handsets, but there’s something to be said for putting the customer’s at the top of the priority-list – which is Sprint’s new tack on their wireless business.

OpenMoko opened up sales of the FreeRunner - the open-source successor to the OpenMoko Neo1973 - last week, and we'd...