With the iPhone 3G just over the sun-eating horizon, and the iPhone 2.0 OS already out and about, iPhone hacking fans are probably eager as beavers to get their next-generation iPhone 3G’s and iPhones with updated firmwares on the path to being jailbroken and even unlocked.

The venerable iPhone Dev Team has posted screenshots of what looks to be the iPhone 2.0 OS boasting both the AppStore as well as Installer. The network logo in the below screenshot also shows MTS as the network of choice – an unofficial iPhone network. 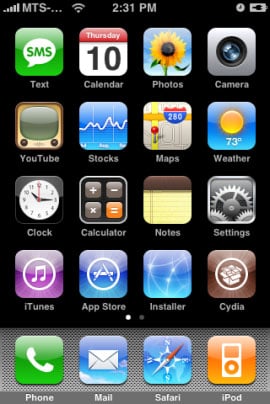 Now, the iPhone Dev Team will have us know that full read/write access (jailbreak) to the iPhone 2.0 OS filesystem will allow iPhoners to get their fill of freely distributed and AppStore-skirting iPhone applications. And, with BootNeuter in tow, the iPhone 2.0 OS can also be unlocked to work on any GSM network around the world – official partnership with Apple be damned.

The tool to make all this happen with the iPhone 3G and updated iPhones running the iPhone 2.0 OS will be launching in the near future. We’ll keep you updated. But, for now, rest easy in knowing that you can have all of the newest features built in to the new firmware and eat your jailbroken cake, too!

If there's one thing that AT&T learned from last year's EDGE network-overload, it's that mobs and hoards of over-eager iPhone...