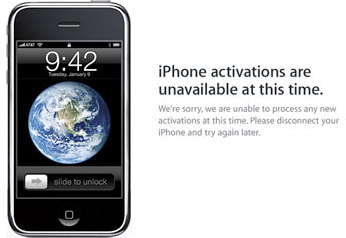 It seems iTunes servers are overloaded and some people are experiencing difficulties when trying to activate their iPhones. AT&T is aware of the problem and they said:

We have had reports that customers attempting to download new iTunes 7.7 software to their new iPhone may get an error message saying “page not found.” We have reported this issue to Apple. While Apple works to resolve this issue, we are asking customers to sync their newly activated phone later at home.

Gizmodo’s Benny Goldman in NY said he has left the store without activating because he thought he would do it on his laptop. However, he wasn’t able to do so. “I went back inside the Apple store and didn’t fare any better. We were just told by an Apple employee that they are slowing down the number of people they are letting into the store and working on the servers in order to fix the problem,” he added.

Check out the full iPocalypse story on Gizmodo.

Here are five iPhone applications you may want to consider installing. I've intentionally missed Facebook and MySpace, as I'm sure...