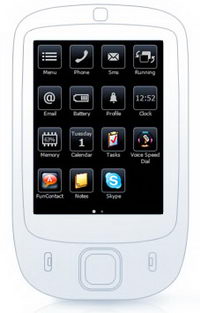 VITO Technology tries really hard to make Windows Mobile users love their devices. Earlier we saw them releasing the iWindowsMobile Communication Suit — the application pack that ultimately makes Windows Mobile smartphone look and feel like an iPhone — and now, they’re out with Winterface.

In case you own HTC Touch Diamond or Samsung i900 Omnia, I wouldn’t suggest installing the new UI on top of what you got. However, if you’re not that lucky to have any of the two phones mentioned, you may want to seriously consider Winterface. The new VITO’s app bundles a launcher, a task manager, and a multitude of Today plug-ins. In addition, it allows you to have as many screens as you want and put icons on apps, settings and contacts. And, as we’ve kinda expected, flipping through screens is done by sliding finger gestures…

I’ll stop here. You should definitely consider Winterface. More information is can be found at VITO Technology’s website from where you can also purchase the app for $19.95. A free 14-day trial is also available.

If you've been waiting for a Windows Mobile smartphone which has the Treo-like form factor with full QWERTY keyboard, you'll...