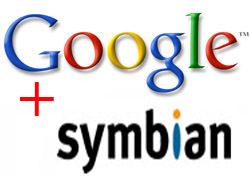 Symbian’s buy-out by Nokia, by far the largest handset manufacturer to rely on the Symbian smartphone mobile operating system, paves the way for an open-source Symbian environment that will hopefully spark a new wave of Symbian-based mobile platforms.

With Symbian’s code destined to be opened up by the Symbian Foundation for all to use, the software maker has announced today that it is open to collaborating with Google on “operating system level.” It seems that Symbian wants to make friends with Google and their Linux-based Android mobile operating system – which can be considered an open-source competitor to Symbian.

Google formed the Open Handset Alliance (OHA) to help push the open-source Android platform among mobile phone vendors, and Nokia answered by forming the Symbian Foundation to tout Symbian’s open-source code. The two camps can be seen to be competing against each other for smartphone market share. But, with today’s announcement, Symbian looks to be extending a hand in friendship to Google.

We can see the two open-source mobile platform initiatives working together to cross-license applications and services across both Android and Symbian operating systems. Of course, that’s all speculation. But, with Symbian already using Google Maps and Search, it’s not hard to imagine Symbian wanting to push some of their own services through Android – in return for more extensive support for Google services on Symbian.

The rapidly consolidating mobile platform market signals the next-step in the smartphone revolution. Segmentation of the mobile operating system environment has hindered standardized services and application, but with large groups of developers and handset manufacturers choosing to side with one of a just a few remaining mobile OS camps, we’ll be seeing some significant headway in the mobile space.

Following on Rogers' attempt to appease the disgruntled iPhone 3G masses with a generous $30 data plan, the Canadian GSM...