Like any good federally-sanctioned frequency spectrum auction should do, the recently-wrapped Canadian AWS (advanced wireless spectrum) spectrum was auctioned off in hopes of sparking competition and driving down wireless prices from Canadian carriers like Rogers, Telus, and Bell. Canada saw 105 Mhz of spectrum in the 1710-1755/2110-2155 MHz AWS frequency range auctioned off for a total of almost $4.25 billion, after 331 rounds of bidding. And, to help encourage competition, a 40Mhz swath of Canada’s AWS spectrum was set aside for new entrants, like Globalive Wireless – with the remaining 65Mhz open to all bidders. 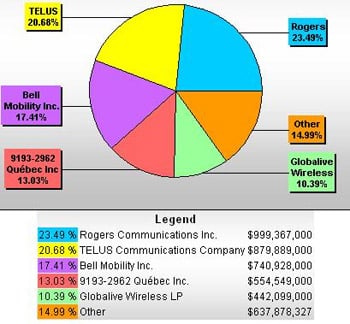 Not so unexpectedly, Rogers came away as the biggest spender – coughing up $1 billion for 59 licenses. Telus scored 59 licenses for $880 million, while Bell snatched up 54 licenses for $740 million. And, the 20Mhz B-block dedicated to “new entrants” was awarded to Globalive Wireless for $278.4.

“The auction exceeded our expectations in terms of the level of competitive bidding activity. I hope the industry keeps this competitive spirit alive as it enhances and expands its services with improved access to the spectrum,” said Industry Minister Jim Prentice.

As expected, the spectrum auction netted Canadian coffers approximately $1.41 per megahertz for each potential customer – more than the AWS auction earned for the US.

Let’s hope the auction actually helps spur more competition and drive down wireless costs for the consumer. Because, if things stay true to the status quo, Canadians are going to keep getting the short stick on wireless service.

And the MobileMe fiasco continues. Apple just can't seem to find their way out of the MobileMe push data services-hole...