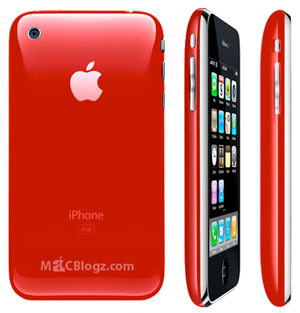 Red iPhone may be introduced during the upcoming Christmas shopping season. It’s still a rumor, but it makes perfect sense as about that time all the hype surrounding the iPhone 3G launch may start to slow. With the device like this, Apple could further push its sales forward.

Apparently, the iPhone 3G in red will be sold as part of the (PRODUCT) RED campaign, where parts of the profits are donated to the Global Fund to fight AIDS in Africa. In the past, Apple has released several such products like (PRODUCT) RED iTunes gift cards, a red 8GB iPod Nano, and a red 1GB iPod Shuffle.

The low-end Nokia 2600 is apparently coming to AT&T. Specs wise, there's nothing too exciting, but this is Nokia we're...