The recently released iPhone 2.1 firmware beta has, like many beta firmwares before it, been a rewarding source of potentially upcoming iPhone features and functionality. Previous iPhone firmware betas have led to the speculation, and eventual implementation, of iPhone features like the iPhone iTunes remote, geo-tagging photos, and character-recognition, just to name a few.

With the new iPhone 2.0 OS beta, iPhone developers have uncovered yet another morsel of hope for enhanced GPS functionality. Following on Joswiak’s announcement that Apple is working to bring turn-by-turn GPS navigation to the iPhone, which contradicted David Pogue’s assertion that the iPhone’s GPS hardware wasn’t up to such a task, the iPhone 2.1 beta has shown an updated Core Location library that is capable of tracking the iPhone’s direction and velocity of movement. 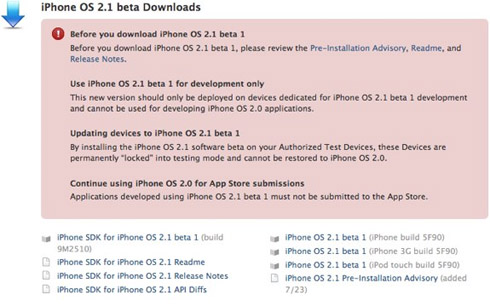 Additionally, it seems that Apple is starting to build-out their highly-anticipated background push notification service. The nascent development of the background notification confirms Apple’s intent to roll-out a push-data delivery system that would allow native iPhone applications to receive alerts, messages, and other data in while inactive. Rather than run multiple applications in a true multi-tasking environment, Apple’s push background data will deliver similar multi-tasking performance in a more streamlined and efficient solution. The ability to deliver data to dormant applications allows the iPhone to reduce power-consumption, as well as allowing the iPhone to run faster, by not having to allot processing resources to unused applications.

The new Core Location code is suspected to be the first step in enabling turn-by-turn GPS navigation on the iPhone 3G. Location data like direction and speed-tracking are essential to enhanced GPS features, and building such features in to the latest iPhone 2.1 firmware beta is likely Apple’s preparation for releasing turn-by-turn GPS functionality. And, the prospect of having the push background notification service up and running in the near-term is indeed exciting.

It's better than nothing. While customizable Sidekick fans are squirming in their seats for T-Mobile to go live with their...