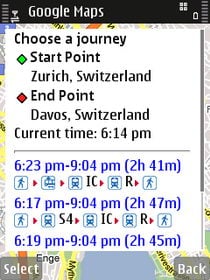 A few weeks ago Google has released Google Maps for mobile with Transit directions for BlackBerry and Java-based handsets. Now, they’re bringing the same feature to Windows Mobile and Symbian S60 based devices, to help users take advantage of the public transport in more than 50 cities.

I’ve no doubts, more cities will be added in the future, but for the time being, it’s not bad at all.

In addition to the handy new feature, the updated version of Google Maps for mobile also features star-ratings for businesses as well as user-generated content that will surface in search results allowing you to see what real people think about a particular business or place.

In a nutshell, you do want the new version of Google Maps. Hop over to google.com/gmm and take it from there…

Proud of that hot, new ride you just bought yourself? Sure you are. But, whether you're just mashing the throttle...