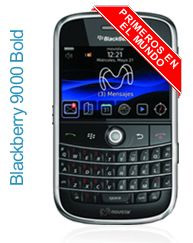 If you thought the US or Canada were to be RIM’s launch-countries of choice for the new flagship BlackBerry handset, you’d be wrong. Sure, Canada is RIM’s home turf, and the US is responsible for a serious chunk of BlackBerry sales. But, it seems that Chile’s Movistar is now officially the first carrier to offer the BlackBerry Bold 9000 to eager push-emailing customers.

Movistar is promoting their Chilean division as being the “First in the World” to go live with the BlackBerry Bold and its 3G data connection and high-res display. But, the distinction of being the first kids on the global-block to play with the hottest new toy from Waterloo comes with a not-so-small price tag – 299,990 Chilean pesos (about $588) to be more specific.

So, if you’re living in Chile and have the discretionary funds to support extravagances like buying newly-launched handsets, head on over to your local Movistar dealer and grab a BlackBerry Bold of your own. Just don’t rub it in our faces, okay?