The Nokia N85 has only just recently come to light as a Nokia N96-esque pseudo-slider bearing the same glossy-black finish and backlit slide-out media controls that we fell in love with on the N96. Last we heard, the device was that Nokia seemed to be aiming the Nokia N85 to be placed towards the high-end of the N-series lineup – somewhere near the range-topping Nokia N96.

Today we have confirmation from the FCC that the Nokia N85 will be coming to US shores with a fully US-compatible tri-band 3G radio in tow. The quad-band (850/900/1800/1900Mhz) GSM/EDGE Nokia N85 complements it’s world-traveling frequency support with support for 3G data speeds in the 850Mhz, 1900Mhz, and 2100Mhz frequency bands, ensuring that the handset can not only work almost anywhere in the world, but will also have full HSPA-speed data access.

Here’s what we know about the Nokia N85’s specifications: 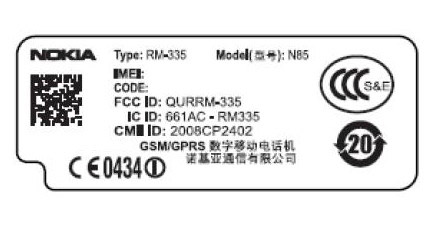 The Nokia N85 feature set (as we know it today) doesn’t necessarily reflect any indications of media-playing prowess, but Cellphonesignal is claiming that the Nokia N85 is being prepared by Espoo to serve as the N-series video-oriented flagship .

We’ll have to wait and see how the Nokia N85 shapes up in the coming weeks and months. Thankfully, the FCC’s approval of the N85 means that we won’t have to wait all that much longer before we get our hands on this sexy handset.

Think cellphone radiation can cause cancer, hearing loss, and other adverse health effects? You're not alone. A California man has...