It’s clear that the Apple iPhone and iPhone 3G have been the most sought after handsets in the US smartphone market for some time now. Following on the previous ChangeWave survey that indicated that the iPhone 3G would have a “tsunami like impact” on the smartphone market, ChangeWave has released a new survey that shows RIM and its BlackBerry aren’t taking the issue lightly. 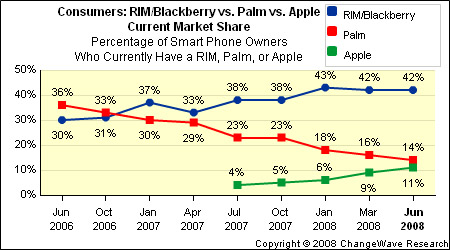 The latest ChangeWave survey data shows that a total of 4% of respondents report they’re “Very Likely” to buy the new RIM BlackBerry Bold when it becomes available. Another 13% are “Somewhat Likely.” 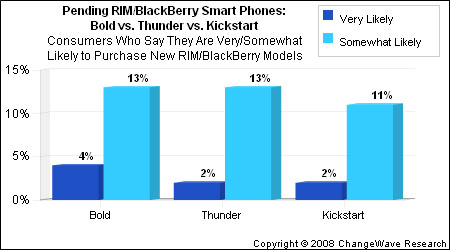 According to the data, RIM and Apple are poised to battle for the lucrative US smartphone market. The iPhone 3G still takes the lead for planned smartphone purchases, but RIM is following in a strong second. And, with an installed user-base that far exceeds the iPhone’s, the BlackBerry lineup is sure to put up a good fight. Unfortunately, that means the lesser smartphone competitors are going to have to duke it out for the remaining smartphone market scraps.

“The real losers in this smart phone battle will most likely be the second-tier players, who could find themselves increasingly pushed to the sidelines as the two Goliaths battle for market dominance,” says Tobin Smith, founder of ChangeWave Research and editor of ChangeWave Investing. That couldn’t be a reference to Palm, could it?

The survey was conducted after the iPhone 3G announcement but before the handset’s release and included a survey pool comprising 3,567 participants.

When it comes to a Linux-based mobile platform, Google's Android captures more than its fair share of the wireless industry's...