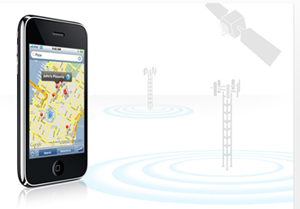 There have been scattered reports of some iPhone 3G users experiencing less than stellar 3G signal reception and call-performance on their gloss-finished iPhone 3G handsets. The carriers are blaming Apple’s hardware. Apple points the finger at carrier’s network issues. In the end, the customer gets stuck with sub-par wireless reception on their brand new iPhone 3G.

Speculation has led some to believe that the Infineon-sourced 3G chipset used in the iPhone 3G is to blame. Following on the belief that Apple programmed the iPhone 3G to demand a 3G signal that’s more powerful than what the iPhone 3G needs to reliably deliver 3G services, a new report from Business Week speculates that an iPhone software update could fix 3G signal issues.

The iPhone 3G is presumed to be programmed so that when too many people access their local 3G cell, the iPhone 3G will perceive that the 3G signal quality has dropped below the preset threshold and revert to the EDGE network – even when there’s still sufficient 3G bandwidth available to support reliable 3G calling and web surfing. And, as more and more iPhone 3G’s come online, the problem with overcrowded 3G networks will likely get worse.

Apple’s next version of the iPhone OS, iPhone 2.1 OS, is expected to bring with it the necessary code changes to allow the iPhone 3G to hold a 3G signal even when the local cell approaches saturation.

Why wait in those long lines to get your hands on the iPhone 3G when you could just put in...