Rogers is really making a strong case for GSM networks in the Great White North. With the iPhone 3G already under its wing, and the BlackBerry Bold now bolstering its high-end GSM smartphone stable, Rogers is leveraging their position as Canada’s GSM carrier to good effect. Rate plan costs aside, we’ve got to hand it to Rogers for bringing the latest and greatest in the mobile space to our 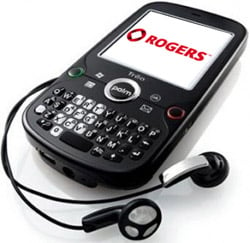 The latest rumors swirling around the newly announced Palm Treo Pro point to Rogers picking up Palm’s newest Windows Mobile smartphone on September 17. With 3G (HSDPA), GPS, 2 megapixel camera, QWERTY keyboard, 320×320 touchscreen, and microSD card slot, the Palm Treo Pro sounds (and looks) like a real winner for Palm. The once-pioneer of the smartphone industry sorely needs a blockbuster like the Palm Centro to help bring the company back to the top of its game, and the Palm Treo Pro could be just such a handset.

With data suggesting that the iPhone 3G's sluggish 3G data speeds and unreliable 3G service are due to AT&T's underdeveloped...