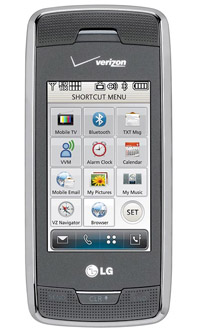 I’m not sure whether it’s the popularity of the LG Voyager itself or the idea to promote the new Visual Voice Mail service that prompted Verizon to release the new model in other color, but “it is what it is” and the CDMA carriers has announced the device in Titanium.

Specs wise, the LG phone remains the same, sporting both a huge touchscreen and a full QWERTY keyboard. The LG Voyager is perfect for music and video playback, hence it will sing along V CAST Music with Rhapsody service, which you can add on your plan for $14.99 a month. In addition — and as we reported earlier — it’s the first device that works with Verizon’s Visual Voice Mail, which additionally adds $2.99 on top of users’ monthly bills. That’s the price per line, plus airtime or megabyte charges and messaging fees, depending on a customer’s plan…

Interested? The Voyager in Titanium is available for $149.99 after a $50 mail-in rebate and with a new two-year contract.

Full release is available on PRNewswire.

Just when we reported the AT&T Tilt aka HTC TyTN II is getting the Windows Mobile 6.1 update, we have...