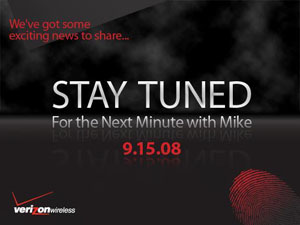 Lots of buzz today on some exciting news in the BlackBerry world. Could it be that a new touchscreen Berry, the BlackBerry Storm will be released? It appears that way. Rumors have it that the Storm will be announced this Monday, September the 15th… and sales of the new device are currently scheduled to go green on November 1st. Any wagers if they’ll actually make that date?

The news leaked via an internal email floating around Verizon Wireless featuring the above image. Note the subtle hints in it… Hmmm, I wonder what it could be about? Stormy clouds, finger-print… touchscreen? Hmmm I wonder!? 🙂

The latest also pegs that Verizon will launch their BlackBerry Storm Website on Monday as well (check the link on the 15th… we’re thinking it may be active.)

If you’ve been waiting for a touchscreen smartphone from RIM, the wait appears to almost be over.

Note: As Kelly over at BGR noted, I do too love the Photoshop render clouds in the graphic. Nice touch there Verizon. Top notch! 🙂