The 12-minute video pretty much says it all. Well, it says it all in French, but there’s lots to see there.

TouchFLO 3D looks incredible on the WVGA display and almost makes you forget that Windows Mobile 6.1 Professional lies underneath that sleek, new UI. In the end, however, Windows Mobile 6.1 will rear its ugly, old head from time to time.

Unfortunately, the HTC Touch HD you see in the video above was a pre-production unit and wasn’t put through a more comprehensive testing process. What we do know, however, is that the 5 megapixel camera has limited shutter lag. High-megapixel cameraphones are popping up left and right, focusing the consumer on pixel-counts. Shutter lag, on the other hand, doesn’t get enough attention. There’s nothing worse than a blurred picture or a missed shot because the cameraphone was trying to figure out what to do between the time the shutter-button was depressed and the picture is actually taken. To that end, it’s good to see a 5 megapixel cameraphone with very limited shutter lag. 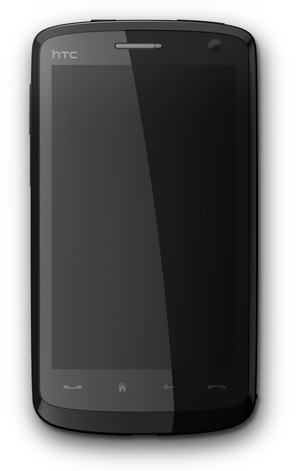 amazingly beautiful. The on-screen keyboard seems to give ample space for even the stubbiest of fingers. Although, the slightly squishy pressure-sensitive touchscreen is reportedly a bit of a drag compared to the iPhone’s multi-touch display.

As expected, the HTC Touch HD features the Opera Mobile browser to put that HSPA 3G data connection to good use. But, with the gorgeous 3.8-inch WVGA display squeezing out the touch-sensitive navigational control surface that we’ve come to love on the HTC Touch Diamond, the HTC Touch HD uses tweaked version of the Opera Mobile web browser to quickly zoom in and out of a particular webpage. With the HTC Touch Diamond and HTC Touch Pro, a double-tap on a region of the webpage results in a quick zoom-in. Alternatively, a simple circling of the finger around the touch-sensitive navigation surface will have HTC Touch Diamond and HTC Touch Pro users zooming in and out of webpages and documents. The HTC Touch HD doesn’t have the touch-sensitive navigation surface below the display, and so offers users a zoom-bar (triggered by tapping a magnifying glass icon in the lower-left corner of the display) along the bottom of the display that allows users to quickly adjust zoom levels by sliding their finger across the bottom of the touchscreen. (You can see the magnifying glass in the pictures below).

The HTC Touch HD looks like a perfect fit for most hands. It’s about the same size as the iPhone 3G, and features an even slimmer profile. Combined with the amazing 3.8-inch WVGA touchscreen that dominates its front-face, the HTC Touch HD will definitely be giving the Apple iPhone 3G some serious competition. We’ll reserve final judgment until we get an HTC Touch HD in-hand. But, from the looks of it, the HTC Touch HD could very well bury the iPhone 3G in an avalanche of superior technology.

Cupertino had better be working on a WVGA-toting iPhone 3G successor….

[Via: Generation The Phone House]

Props to Simon and James for the find!

Looks like Telus isn't going to be the only one enjoying the HTC Touch Diamond - internal docs are showing...