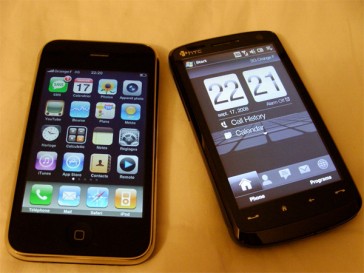 With a 3.8-inch WVGA display that completely dominates the entire front-face, and a form-factor that seems to at least have been inspired by the iPhone 3G, the HTC Touch HD was bound to be compared to the iPhone 3G. And, now we have side-by-side picture comparisons to see just how the iPhone 3G measures up against the new list-topper – the HTC Touch HD.

It goes without saying that the 3.8-inch WVGA touchscreen takes the cake as the stand-out feature on the HTC Touch HD. Ironically, the gloriously enormous and high-resolution WVGA display takes away from the fact that the HTC Touch HD sports a 5 megapixel camera – which is a first for HTC. And, with GPS, WiFi, 3G (HSPA) data connectivity, and a spec-sheet that reads like an encyclopedia of smartphone features, the HTC Touch HD is destined to take the iPhone 3G on head-to-head this holiday shopping season.

The HTC Touch HD takes the slim silhouette and sleek lines made popular by the iPhone 3G and bumps up the feature-set to true HTC flagship-standards. The VGA displays on the HTC Touch Diamond and HTC Touch Pro are already brighter and crisper than the iPhone 3G (although, the iPhone 3G display does outperform in direct sunlight), so there’s no doubt that the massive 3.8-inch version of those same VGA touchscreens (stretched out to WVGA proportions) trump the iPhone 3G’s 3.5-inch display.

On the flip-side, we have the iPhone 3G’s more polished and intuitive UI. With multi-touch functionality in tow, the iPhone 3G continues to outshine the competition when it comes to the look, feel, and execution of the user interface – making for a far superior user experience. The iPhone 3G’s strength used to lie in its iPhone OS, the 3.5-inch multi-touch display, and its head-turning style. But, with HTC bringing an even larger 3.8-inch display with WVGA resolutions to the table, the iPhone 3G is relegated to fighting the good fight on UI-merits.

The iPhone 3G is no stranger to high-tech hardware assaults from other smartphone makers, but the Apple handset did manage to keep the upper hand in the “looks” department. But, the HTC Touch HD is just as good looking; has a snazzier, more sensual WVGA display; and also packs a mightier hardware-punch. So, it comes down to a better UI or more advanced hardware. Which will you choose?

Enjoy the HTC Touch HD vs iPhone 3G shootout below.

Find the rest of the photo gallery at Generation PhoneHouse.

The 12-minute video pretty much says it all. Well, it says it all in French, but there's lots to see...