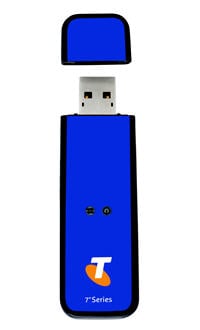 Australian Telstra recently announced the new small, sleek, super-fast Telstra Turbo 7+ USB Series Modem from Sierra Wireless. Thanks to its minimalist design, the HSPA-enabled modem slips easily into a pocket without compromising on connectivity speed. As a matter of fact, the official release says users can count on up to 7.2Mbps download and 1.9Mbps upload speeds on the carrier’s Next G network. Best of all, these speeds could be further increased via future firmware upgrades.

As for the other features, the Telstra Turbo 7+ boasts an external antenna for better reception, microSD expansion slot, and it also comes with a 1GB microSD card. The device is preloaded with Sierra Wireless Watcher software, which installs directly from the modem when inserted into the USB port for the first time.

The Telstra Turbo 7+ Series USB Modem has a recommended retail price of $439 and is available on a range of plans from $149 on a $59 per month plan.

Bling Software has recently launched Active-Phone-Top, what they say is the industry's first widget based on-device-portal (ODP) solution for wireless...