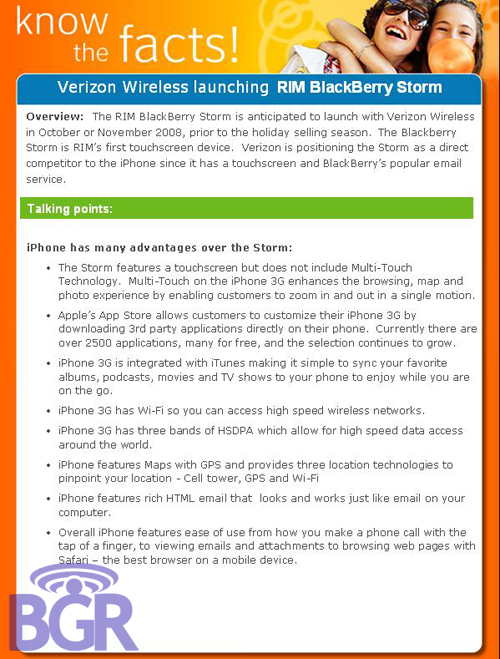 Internal RIM and AT&T documents have floated up, discussing the competitive points between the iPhone and the upcoming BlackBerry 9530 on Verizon. The long and short of the arguments is that the BlackBerry Storm has all the back-end security and support, while the iPhone 3G has the panache of multi-touch and iTunes integration. A lot of AT&T’s points haven’t been really well-researched, like the HTML e-mail viewing (avaialble as of BlackBerry OS 4.5), AppStore (BlackBerry has plenty of 3rd. party software outlets, and they aren’t ruled with an iron fist), maps and GPS (hasn’t been ruled out, and it will likely be on the GSM version), and Wi-Fi (a 9520 model will likely follow shortly after the initial Storm), but hey, we all know what camp I’m in. To be fair, the Storm’s selling points will only really appeal to the IT admin that cares about locking down devices, although they are trying to make a pitch for the benefits of data compression as a means to save on wireless costs and battery life.

See, when the BlackBerry Bold came out, everyone was making a big deal over the iPhone vs. Bold, but the Storm and the iPhone is going to be the real fight to watch out for. My only real worry for the BlackBerry Storm is the quality of their touchscreen. It looks like they’re doing some funky stuff with pressure sensitivity, as the keypad will light up as your finger goes over the virtual keys, but not actually press until you push down on them, and small vibrations will confirm keystrokes. It’s a bit of a gamble, but I trust RIM to polish the experience and get it up to the snuff of their traditional tactile keypads.

Mobile consumers these days aren't going to take text message spam lying down. The precedent has been set, forcing spammy...