Sprint still has the exclusive on their HTC Touch Diamond variant, and we’re still waiting for the BlackBerry Storm to get some solid pricing and release information. But, thanks to an anonymous source, Engadget Mobile has shed some light on possible launch windows for the upcoming touchscreen handsets from two of the biggest names in the smartphone market – HTC and RIM (makers of the BlackBerry lineup).

Training schedule documentation from deep within Verizon’s secret lair reveal that Verizon employees should complete their handset familiarization course for the HTC Touch Diamond by December 3 and should have their heads wrapped around the BlackBerry Storm’s feature-set by November 2. It’s probably safe to assume that Verizon is planning to launch both devices shortly after their sales team has collectively completed training. 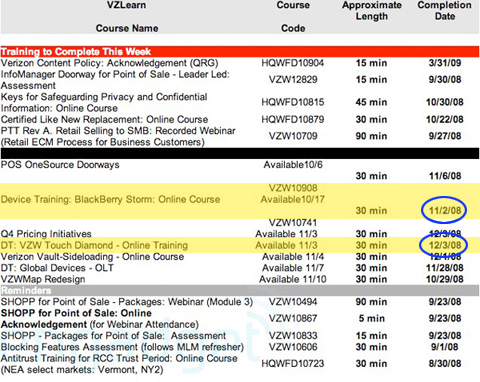 Sure, it’s obvious that Verizon would want two of their biggest ticket handsets launching in time to cash in on the holiday shopping rush, but it’s nice to be able assign even the roughest of launch-windows to upcoming devices.

BlackBerry Storm hitting Verizon by mid-November with the Touch Diamond following in mid-December (before the holidays)? We can definitely see that happening.

It's not often that the entire world waits for a US-only exclusive handset launch - an event made even more...