The last we heard, the AT&T Bold was rumored to be delayed till November. AT&T acknowledged early that they would carry the device, yet it appears they may be one of the last to actually offer it up for purchase… I’m sure a lot of you are getting tired of the rumors, speculation and delay… After all, 30 other countries around the world already have the Bold in their BlackBerry lovin’ hands, but the US is still waiting!

BGR has posted some info from the Best Buy systems that seem to indicate availability for the BlackBerry Bold will be October 26 (Best Buy is an autorized retailer for AT&T). See the picture below: 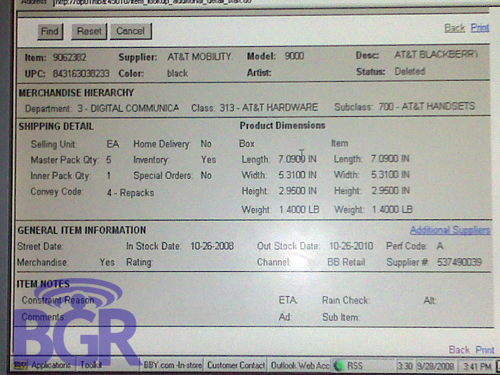 As with all of these rumors… I’ll believe it when I see it, and I have a BOLD in my hands. Until then let the rumors continue.

[Via: BGR and CrackBerry]

With the Verizon BlackBerry Storm hype growing day by day, it seems there's something new to look at each day....