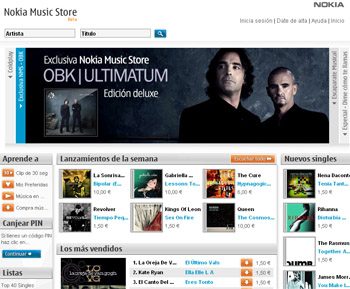 Nokia keeps opening its online music stores around the world. Next on their list is Spain, where just today the Finnish giant announced the grand opening.

Spanish Nokia Music Store has a catalogue of more than 4 million songs amongst which can be found the highest-selling records, independent record labels, and new national talent. According to Nokia, the catalogue is focused on the local market, as more than 70% of the music that is sold in Spain is local. To achieve this, Nokia has a team in each country to determine more closely the tastes of each region. The store’s search engine enables the differentiation between genres such as Flamenco, Latin music, Alternative or Electronic, to name a few.

Individual tracks cost 1.50 EUR each, whilst whole albums are 10 EUR. The monthly streaming service, which enables users to listen to any music desired without limit, costs 10 EUR.