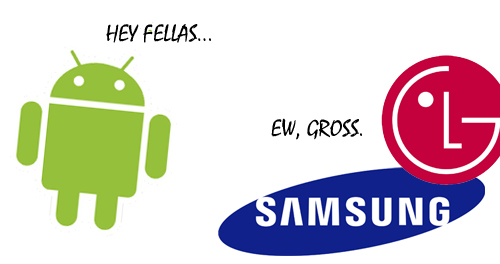 Now that HTC has blazed the trail for manufacturers to give Google’s Android platform a go, but apparently T-Mobile’s G1 was “short of expectations” and the odds of LG or Samsung releasing their own Android handsets before the second half of 2009 are slim, according to Mirae Asset Securities. Even though Motorola and Nokia might be getting fresh with Android, clearly other manufacturers, including Sony Ericsson, remain hesitant to throw their chips in with the new kid on the block. It’s hard to read their intentions at this point – it sounds as if it’s fairly certain everyone will make an Android phone sooner or later, but want to let the G1 chew through the kinks first.

Mirae Asset Securities says many advertisers remain unconvinced by Google’s proposed application-centric revenue model, which isn’t entirely uncalled for. Apple’s the only one who has successfully pulled off a prepackaged software store to noticeable success, but we still haven’t seen how all of that developer excitement will be delivered to the end-users front door. If the G1 can pull it off, hopefully these other manufacturers will warm up a bit.

Samsung u430 lives on Verizon

Just as we expected, Verizon is now offering the low-low-end Samsung U430. Two times "low" won't wet anyone's pants, but...