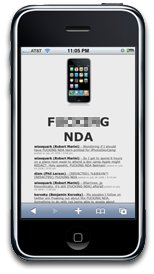 The NDA in question was the source of much frustration!

Apple has announced today via the Apple Developer Connection that it has dropped the NDA that has frustrated iPhone developers since the release of the 2.0 firmware. You can view the message from Apple here. Apple finally stepped up to the plate and admitted that the NDA ‘created too much of a burden on developers, authors and others interested in helping further the iPhone’s success’.

Apple attached the NDA to developers that wanted early access to the SDK before 2.0. Of course, all developers assumed that the NDA would be lifted once 2.0 was released, but this wasn’t the case, till now. Most developers were highly concerned that the NDA was still in place, it raised concern that Apple may have some crazy plans up their sleeve. Not to mention it made it tough for anyone to get help or advice via forums, blogs or any other medium.

From all reports I’ve read, developers are now more than delighted. Expect coding snippets, help forums and blogs to pop up all over the place. This should certainly open up the floodgates for iPhone app development to say the least. Good move Apple.

Exclusive membership for Newber service up for grabs!

Raise your hand if you like getting free stuff. We thought so. How about an exclusive membership to the latest...