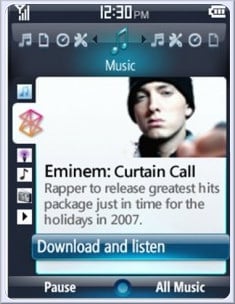 While this isn’t the Zune phone that many have speculated is in the works in Microsoft’s R&D labs, it’s the next best thing. The media-playing (and presumably sharing) capabilities of the Zune music player have been confirmed to be coming to the Windows Mobile platform. Microsoft’s CEO Steve Ballmer confirmed that the Zune software that powers the Zune media player “will also be ported to and be more important not just with the hardware but on the PC, on Windows Mobile devices, etc.”

We can’t see how Ballmer could be any more clear about the Zune software hitting the Windows Mobile OS – presumably with Windows Mobile 7 in 2009 – to bring all that digital media-player functionality that Zune-fans have been calling for in a mobile phone.

Ballmer’s vision for Microsoft has the company bringing the functionality of its Zune media player to Windows Mobile smartphones around the world. Rather than concentrate on manufacturing smartphones to chase Apple’s iPhone for market share, Zune on Windows Mobile essentially allows Microsoft to build up with mobile brand with more feature-appeal.

What about Zune Marketplace on Nokia handsets?