Nokia’s long-expected unlimited subscription-based music download service has just gone official. With the Nokia 5800 XpressMusic Tube getting a little more official today, Nokia has announced that they’ll be bringing their “Comes With Music” offering to the handset next year. But, while the Nokia XpressMusic 5800 Tube might be the brighter-shining star, Nokia has more modest plans for their “Comes With Music” launch.

Rather than debut the unlimited music download service on their iPhone-fighting Nokia Tube, Espoo will apparently launch the “Comes With Music” service on October 16 and will first be available on the Nokia 5310 XpressMusic “Comes With Music” Edition. Included in the purchase price of the Nokia 5310 XpressMusic handset is a 12 month subscription to the Nokia Comes With Music program, allowing users to download as many songs as they wish during the 12-month trial period – the kicker is that customers will be allowed to keep their downloaded tracks forever. 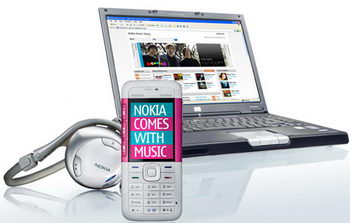 The launch of the Nokia Comes With Music program ushers in a new age of music delivery to mobile phones. Not only does the Nokia Comes With Music program offer access to millions of songs from just about every worthwhile record label in the business, but customers can download an unlimited number of songs whenever and wherever they please. Customers won’t have to worry about the cost of downloading a single song or album, making it easier to get their feet wet with new music. The “Comes With Music” edition handsets will be offered with 12 months worth of unlimited music downloads.

“Comes With Music sets a precedent for consumer value and convenience that the rest of the digital entertainment industry is already copying,” said Tero Ojanperä, executive vice president and head of the Nokia entertainment and communities business. “Trying out a music recommendation is spontaneous as customers can download without worrying about the cost of an album or a track – the freedom and simplicity of the service is unparalleled. And Comes With Music gives you unlimited access to the millions of tracks in the Nokia Music Store and the music is all yours to keep – because it’s not a revolution unless you get to keep your music.”

Apple and the pay-per-download iTunes Music Store should have reason to worry. Or, at the very least, offer a subscription-based unlimited download program.

As expected, the Nokia 5310 XpressMusic Comes With Music Edition will be available for £130 (about $230), which includes a year’s worth of unlimited music downloads, from CarphoneWarehouse.com.

This is the Nokia XpressMusic 5800 Tube