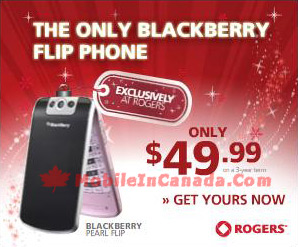 Who knows if this is for real though. Could more than easily be a photoshop job. Looks a little fishy to me. I don’t think Rogers’ would let an internal ad mock out of such poor quality. I could be wrong, but one thing is for sure… Look for the Flip to make it into retail outlets before or during the holiday season.

The SGH-i616 on Rogers just got blessed by the powers that be at Samsung with Windows Mobile 6.1. Some of...