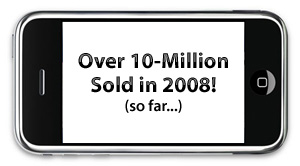 I had to admit, when Steve Jobs and Apple stated their goal was to sell 10 Million iPhones in 2008… I considered that quite a lofty goal. I mean, there’s so much competition already out there in the marketplace, and you know that the other big-wigs are going to be out to get Apple… releasing new fangled ‘iPhone Killers’… But wouldn’t you know it, it looks like they’ve done it!

From a report at AppleInsider:

An effort on the part of members of Mac Observer’s AFB to track IMEI iPhone numbers has led two technology analysts to conclude that Apple has drastically surpassed analyst’ Q4 iPhone sales estimates, and reached its goal of selling 10 million iPhones in 2008 three months early.

Ok, I can hear you saying ‘What the heck are IMEI iPhone Numbers?’ Let me explain in brief.

An International Mobile Equipment Identity Number (or IMEI) is a unique 15-digit code that gest assigned to each individual iPhone produced. You can find this number on the back of the box in which your iPhone was packaged. You should also be able to find it in iTunes when you have your iPhone connected to your system. Within the 15-digit code are two 6-digit numerical sequences that are crucial to determining the number of iPhones being produced. The first 6-digit sequence is known as the Type Allocation Code (or TAC) and signifies a particular build or set of iPhones. The second sequence is unique to each iPhone produced within that series so that 1 million iPhones can be registered to one TAC. Briefly, the first six numbers account for the set of iPhones, and the other six account for each iPhone within that set. Make sense?

The Apple Finance Board at Mac Observer have been tracking these numbers closely and noticed thatby early September Apple was already on its eighth TAC. That would mean that 8 million iPhones had already been manufactured. Huge. The latest numbers collected by the aforementioned group have Apple at well over 10 million units sold so far in 2008.

Analysts such as Kathryn Huberty of Morgan Stanley estimated Apple would sell 9.3 million iPhones in 2008. Keith Bachman of BMO Capital was quoted to estimate that Apple would sell roughly 8.5 million. Looks like they were well off.

Over 10 million units sold with 3 months to go. Wow. That’s a heck of a lot of iPhones. Can I get a high five? Don’t leave me hangin’ here!

My question is this. 2008 was a great year for the iPhone. The new 3G model, lots of new features… new firmware, the App Store was announced and is off and running… But what is going to come in 2009 to continue the growth and proliferation of the iPhone? With RIM due to release its own BlackBerry App Center, and the BlackBerry Storm, plus a plethora of other touchscreen devices soaking the market… You can see where I’m going here. How is Apple going to stand head and shoulders above the rest?

In our push to converge all sorts of devices and daily activities into fewer and fewer gadgets, we seem to...