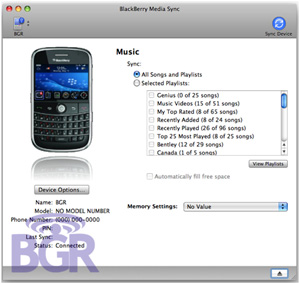 If you run a Mac, chances are you are aware of the lack of BlackBerry syncing, app loading, backup and other basic services that are available to all working on PC’s. Frustrating to say the least. Looks like RIM is finally going to step up to the plate.

RIM has been working hard to bring all of the good mac folks up to speed in the BlackBerry world. And now, new looks of the BlackBerry Media Sync for Mac are emerging, and it looks not so bad! The images from BGR are not the final version, so expect some changes to take place before the final launch… I would expect the final version to break down media types much like iTunes, into your music, photos, videos, etc… But we’ll see. From the images below you’ll notice that all you can do is sync your music to your device or memory card, and also select individual playlists or all of them. I’m keeping my fingers crossed that there will be many more features built into the final version.

I do not want another frustrating experience (have had too many already), so I’m hoping they get this one right the first time around.

Softbank Mobile has recently scored its first major corporate customer for the iPhone in Japan. It's a management and technology...